Discover infinite beauty as you explore one of the most alluring and exclusive parts of East Africa. Small, luxurious camps in the Selous Reserve offer access to one of the country’s most remote and unspoiled wilderness. Freedom and space provide an unusual safari experience along the Great Ruaha River as you may wander in the footsteps of whatever creature strikes your fancy and capture once-in-a-lifetime photographs without having to wade through crowds of fellow travelers. Delve into an intimate face to face with some of nature’s greatest marvels, from lion, hippo, rhino, and cheetah to the towering baobab trees that have stood through the centuries, on this exceptional tour of Tanzania. For the ultimate experience, finish off your adventure at the exotic spice island of Zanzibar on an optional extension. 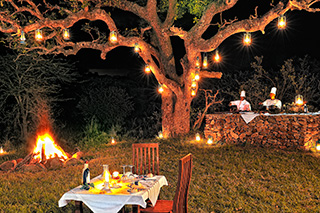 Depart the USA and fly overnight to Dar Es Salaam, the premier city of Tanzania, where you will be met and escorted to your luxurious hotel. Enjoy the panoramic views of the tropical gardens, rest from your flight, or take a dip in the swimming pool before gathering tonight with your fellow travelers for a welcome dinner.
DAR ES SALAAM SERENA.
(Meals Aloft; D)

Get set for your safari adventure as you’re transferred to the airport this morning for a short flight to the Selous Game Reserve. Pack your cameras and get ready for the ultimate encounter with some of the most magnificent creatures in nature. Your exciting wildlife viewing will be done on foot, by boat and by vehicle during your stay at Selous (pronounced Seloo) – the second biggest conservation area in Africa, and the largest wildlife reserve on the continent at nearly four times the size of the Serengeti and larger than the country of Switzerland! Here you will witness an impressive variety of mammals, birdlife, and wild flowers in a mosaic of wooded hills, open miombo woodlands, and grassy plains and marshes. Rather than a rigorous schedule of tours, you will be given the unique freedom to wander the park at your leisure, delving into any area you find interesting and discovering the bounty of incredible sights in Selous. Your first two nights will be at the intimate Rufiji River Camp which enjoys a spectacular location high up on the banks of the Rufiji River for the most astounding sunsets. There are 11 individual classic tents, well-spaced along the river bank with en suite bathrooms, solar heated water and a design that combines Makuti palm roofs with Selous sourced paving stones and farmed hardwoods. Sleep to the chorus of hippos granting and the plethora of birds singing. RUFIJI RIVER CAMP.
(B,L,D Daily)

If you’ve ever found the crowds in popular wildlife reserves a frustration, you are in for the ultimate treat. The rarely visited Rufiji River has some of the highest concentrations of hippo and crocodile on the continent. Additionally, it is home to the largest populations of some of Africa’s most sought after wildlife including elephant, lion, wild dog, leopard, buffalo, and herds of plains animals, yet it remains one of the least visited of the great game sanctuaries on the continent. Here, even bird watchers are treated to a visual feast with species including the Knob-billed Duck, Southern Ground Hornbill, Bateleur Eagle, Red-faced Crombec, Green-capped Eremomela, Spotted-flanked Barbet, Sterling’s Barred Warbler, Pearl-spotted Owl, and Bennett’s Woodpecker. The next two nights will be at the Serena Mivumo River Lodge, situated on the panhandle of the Rufiji River in view of the mighty Stiegler’s Gorge. All of the 12 rooms are set along the river among a large shady riverine forest characterized by acacia, tamarind, fig and sausage trees. Traditionally thatched with high vaulted ceilings and picture windows, each room features an engaging mix of classic safari antiques and ultra-modern leather and rattan styled furniture, as well as its own extensive private sun-deck and plunge-pool with river views. SERENA MIVUMO RIVER LODGE.
(B,L,D Daily)

Board a flight to Ruaha National Park, the largest national park in Tanzania. Its undulating miombo bush-covered hills, huge kopjes, open river plains and tree-lined sand rivers contain a wide variety of game. In the dry season, the riverbed is reduced to pools, which teem with fish, crocodiles and hippos. With the onset of the rains the river is transformed to a wide, fast flowing body of water, peaking in April. You are likely to see Grant’s gazelle and striped hyena here as well as wild dogs and bat-eared foxes. Of course some of the larger, more glamorous creatures roam this park too, and you may spot leopard, cheetah, elephant and buffalo as well as over 400 bird species and baobab trees that have been in the park for centuries, some as much as 800 years old. Set on one of the most stunning stretches of the Great Ruaha River, your lodge consists of 24 stone chalets stretching along the river bank. Each chalet has stunning views from a large verandah out front, while the interiors feature all modern comforts. RUAHA RIVER LODGE.
(B,L,D Daily)

Leave the beasts behind and fly to Dar es Salaam where you will be escorted to your hotel. A dayroom is provided for you at DAR ES SALAAM SERENA HOTEL. Later, after a farewell dinner, transfer to the airport for your overnight flight back home bringing with you all the beautiful memories of East Africa.
(B,D Meals Aloft)

Finish your adventure on the exotic spice island of Zanzibar beginning in Stonetown – a place of winding alleys, bustling bazaars and unique wooden doors. Stay at the ZANZIBAR SERENA INN on the Indian Ocean – a haven of tranquility and old-world opulence. Dazzle your senses at a spice plantation and watch rare, red colobus monkeys frolic overhead in Jozani Forest. Then, travel to MATEMWE LODGE for a refreshing stay in spacious villas set on a small cliff overlooking the ocean, and next to a beach with powder fine sand. Enjoy some of the best snorkeling and diving on the continent in the turquoise waters.

Zanzibar follows a similar pattern with rains (longer rains in April & May with short rains in November) but it does not rain every day or all day, rather short showers. Being so near the equator, Zanzibar is tropical year-round, but in summer (December/January) it’s usually windy, so there are pleasant sea breezes. 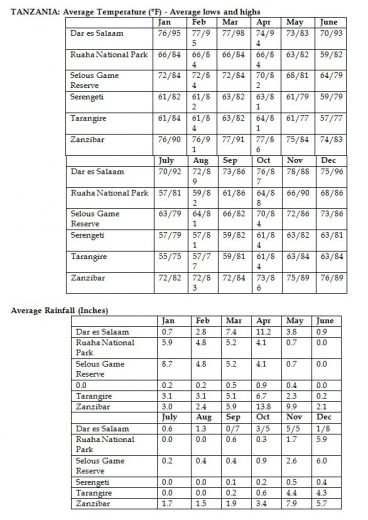