Travel back in time to the days of the voyagers and fur traders and explore the land that allowed Quebec’s first nations to thrive for thousands of years. Start in Québec City, the only fortified city in North America. The St. Lawrence River route occupies a good part of this journey and the forest, mountain and sea coast wilderness provides an unforgettable outdoor adventure. Observe up-close an incredible variety of animal, bird and marine life in their own habitat – beaver, seal, cormorant, osprey, whale, even the possibility of getting close to bears. You’ll be charmed by Québec’s French heritage, outstanding food and the warmth of its people. Bienvenue to this province which is blessed with so many charms! 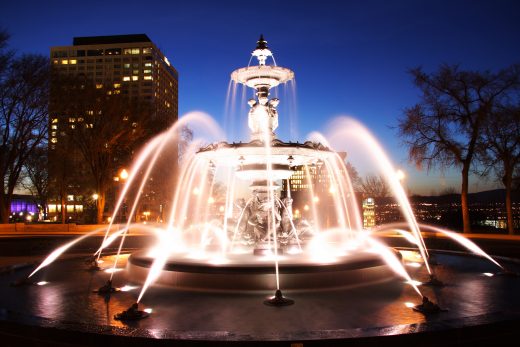 Arrive Quebec City and transfer to your hotel. Having prospered as a fur trade outpost in the early 1600’s, Quebec City now has a dynamic port, a thriving research and technology sector and is home to the Provincial Parliament. Tonight, enjoy a welcome dinner. CLARENDON HOTEL.
(Welcome Dinner)

Québec City is perched high above Cap Diamont, overlooking the St. Lawrence River. Once an outpost for fur traders, the city now has a dynamic port and is home to the Provincial Parliament. Québec City played roles during the Revolutionary War, when American Revolutionaries attempted to “liberate the city”, and World War II, hosting two different conferences, including one where a large portion of the battle plans for D-Day were drawn. The Old Town is a designated UNESCO World Heritage Site and this morning, spend time walking its streets and learning local history. Browse the shops along Rue Ste-Jean, wander among the grassy knolls in the Plains of Abraham, climb to the top of the Citadel, walk the Fortifications, then follow the river boardwalk (the Promenade des Gouverneurs) down to the Victorian waterfront. From there you get the classic view of Quebec City’s most famous building, the Chateau Frontenac. Then, head over to Basilique Notre-Dame and before you know it, you’re back at L’Oncle Antoine.

Have lunch and afterwards travel north to the oldest French settlement in North America and the longest continuously inhabited settlement in Canada. Tadoussac occupies a privileged position at the maritime crossroads of the Saguenay fjord and the majestic St. Lawrence River, with sand dunes and a small lake in the heart of the village.Named after the native word “tatouskak,” meaning breasts and referring to two rounded hills by the fjord, the village is home to only 900 residents.

An afternoon whale watching boat cruise will be a highlight as you sail through the magnificent Saguenay Fjord. The Saguenay Fjord is the Mecca of nautical activities and gives way to a variety of activities, with breathtaking panoramic landscapes included. Open up your eyes and be prepared to be blown away by the amazing landscapes and the rich fauna and flora of the Saguenay Fjord. You might be able to observe marine birds, seals or belugas.

Your stay for the next three evenings will be at the vintage Hotel Tadoussac. Invoking memories of an earlier time, the hotel features white-washed walls, a red roof, and amazing views of the St. Lawrence River and Tadoussac Bay. The hotel prides itself on capturing the history, character and soul of the region, providing intimate accommodations and regional cuisine. HOTEL TADOUSSAC.

Hike in the Saguenay National Park (Baie Sainte Marguerite Sector), named for its formidable fjord, is home to many incredible creatures, including wolves, black bears, lynx, beavers, and moose on land, beluga whales in the water, and peregrine falcons soaring above. From the Discovery and Visitors Centre to the Beluga Point (Halte du Béluga), it’s 3.8 miles (round trip) 2-3 hrs, degree of difficulty: easy.

Later ,you may want to walk along the boardwalk and enjoy the views of the pier and the St. Lawrence. The sand dunes are definitely one of the most beautiful places that you need to visit while in Tadoussac. The original village, which has since disappeared, was first established in this sector. Agriculture led to deforestation and erosion led to desertification. The dunes, is an exceptional site to relax and contemplate the majestic St. Lawrence River.

Your afternoon is at leisure. Take a walking tour and learn more about the history of the fur trading post, which dates back to the late 1500’s. and was the center of the economy in this region for hundreds of years You may want to visit the eye-catching chapel, the oldest wooden church in North America. It was built in 1747 and now serves as a small museum.

You may also choose to go kayaking with the whales for a truly once in a lifetime experience putting you in tandem with ten natural world (optional at an additional cost). In the estuary of the St. Lawrence River you might see Blue, Fin, Mink, and Beluga whales. There is nothing more peaceful than kayaking with the whales in this beautiful setting. HOTEL TADOUSSAC.

Transfer to Cap de Bon-Désir Interpretive Center for a lecture by a marine biologist on the St. Lawrence marine wildlife – seals, whales, marine birds, and a diversity of underwater flora and fauna. The mix of salt and fresh water found here makes the St. Lawrence estuary one of the richest ecosystems on earth. It is also a great place to see whales and marine life from the shore: humpback and fin whales, grey and harbor seals and cormorant. After lunch, enjoy a private whale watching zodiac ride. HOTEL TADOUSSAC.
(Breakfast, Lunch)

After breakfast, transfer to Quebec for your afternoon flight home.
(Breakfast)

July and August is warm and often humid during the day – can reach the 80s, although nights by the water or at higher altitudes are cooler. June and September ar e more comfortable or fresh during the day and sometimes cold at night. September is the best month for the foliage. Montreal can be visited any time of the year, bu t the Jazz Festival is offered only in late June.
x