Discover the magical islands of New Zealand and its rich heritage of cultures, from Auckland’s Polynesian, Rotorua’s Maori, Dunedin’s Scottish and to the English charm of Christchurch – this country is a melting pot of traditions and waterways. A cruise along fjords and lakes created from volcanoes and glaciers exposes the hidden delights of unspoiled wilderness teeming with native plants, trees and wildlife. Majestic mountains tower overhead while geysers spew water towards the skies. It’s no wonder that the Lord of the Rings film trilogy was filmed in this mystical land. 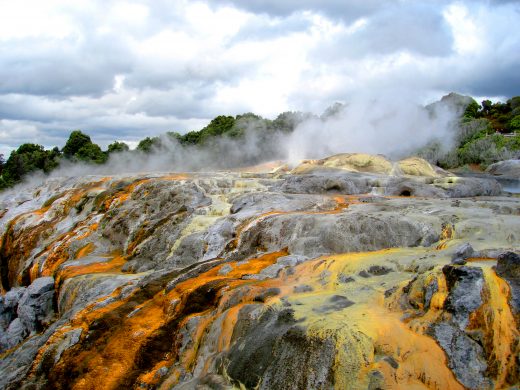 After an overnight flight arrive in Auckland, the ‘City of Sails’ where you will be met by your guide and escorted to your hotel. This afternoon enjoy a half day tour of Auckland, beginning with the 3, 000-foot long Harbour Bridge then merge onto the scenic Tamaki Drive, which skirts along the waterfront, to Michael Joseph Savage Memorial Park, and end at Auckland Museum. Tonight, enjoy a three course dinner and spectacular 360° views of the city from the Orbit Restaurant. RYDGES HOTEL.
(D)

Begin your discovery of New Zealand this morning with a drive to the Coromandel Peninsula. Separated from Auckland by the Firth of Thames and the Hauraki Gulf, the peninsula features lush vegetation, cloaked mountains and white sand beaches that are part of a conservancy established by New Zealand’s Department of Conservation. Take a stroll on Whitianga Beach on the South Pacific side of North Island. The next day begins with a guided tour of the subtropical rain forests, caves and fairy tale beaches of the Coromandel Peninsula. Enjoy a peaceful picnic lunch surrounded by the serenity of this sparsely populated region. Take to the sea for a different view of the peninsula’s rugged beauty and feast your eyes on such delights as Cathedral Cove and the Orua Sea Cave. PACIFIC HARBOUR LODGE, TAIRUA.
(B; B,L)

Get you fill at this morning’s gourmet breakfast buffet, then navigate to Rotorua, on the shores of the gorgeous volcanic lake for which the city is named. The coast route takes you through the kiwi farming town of Te Puke and past the smoking volcanic beauty of White Island. Tonight take part in a Maori cultural experience when you visit Marae and learn about traditional practices such as the bone chilling wero greeting and battle haka. Treat the palate to the delights of traditional slow cooked hangi. Next day drive to the Whakarewarewa Thermal Reserve then explore the Maori Arts and Crafts Institute and Rainbow Springs, where you can hand feed rainbow trout who swim about in translucent ponds. Finish today’s venture in the steaming Waimangu Volcanic Valley, created by the eruption of Mount Tarawera in 1886. NOVOTEL ROTORUA HOTEL.
(B,D;B)

Fly to the east coast of New Zealand’s South Island landing in Christchurch. A tour of the city gives historical perspective as well as a prospective view of Christchurch’s future after the devastating earthquakes of 2010-11. After lunch at the Curator’s House in the picturesque Botanic Gardens, visit the Antarctic Center which celebrates the wonders of the South Pole and afterward visit the New Zealand Penguin Encounter, an indoor/outdoor facility for rescued penguins. Take leave of Christchurch and drive to Ashburton crossing the Canterbury Plains and the country’s longest bridge along the way. Your lodgings for the evening will be in the home of a local farmer replete with home cooked meals. FARM IN ASHBURTON.
(B,L,D)

Enjoy breakfast and some time with your hosts before driving across Canterbury Plains and through Burkes Pass to Mount Cook, the highest point in New Zealand. When you arrive, take off on a 4×4 excursion into Aoraki Mount Cook National Park for awe inspiring views of the austere mountain landscape. THE HERMITAGE HOTEL.
(B,D)

Early this morning get up close and personal with icebergs on a boat tour of Tasman Terminal Lake; explore the huge dripping iceface of Tasman, New Zealand’s largest glacier and taste, touch and walk on 500-year-old ice and snow. Watch as it splits off from the rockface with a thunderous roar crashing into the tranquil surface of the lake. Then motor your way to Dunedin. City highlights include the Dunedin Botanic Gardens and Baldwin Street, possibly the world’s steepest thoroughfare. Next day drive to the Otago Peninsula and visit Glenfallach Gardens, the Royal Albatross Center, and then take an 8-wheeled wildlife tour to see seal pups and nesting cormorants. At the tip of the peninsula is Taiaroa Head, home to a rare colony of one of the world’s largest birds – the Northern Royal Albatross. See the Blue Penguin and if lucky, the rare Yellow-eyed Penguin at Penguin Bay. SCENIC HOTEL DUNEDIN.
(B Daily)

Follow the valley of the Eglinton River and towering, rugged mountains and forest to Milford Sound where you will drop bowlines for a boat tour of the sound and then step below sea level for the best 360° underwater views you can get without a wetsuit. Let out for Queenstown on the shores of the alpine Lake Wakatipu, whose topaz waters are pierced by the jagged peaks of The Remarkables. Next day, take in Queenstown on a short city tour then drive to Arrowtown and the Shotover River in New Zealand’s gold country. Kawarau Bridge offers death defying views and a ride on a Shotover jet boat provides further adrenaline pumping thrills. This evening enjoy a farewell dinner with fellow travelers at Botswana Restaurant. NOVOTEL QUEEENSTOWN LAKESIDE HOTEL.
(B,L; B,D)

A morning at leisure to take in the sites of this gorgeous city on your own before your afternoon flight to Auckland and back to the United States.
(B)

“Bula” …The Fiji Islands is a group of unspoiled, magical and exotic islands in the South Pacific that lie on the 180 Meridian where the dawning of each new day occurs. The 333 islands are the epitome of the picture postcard perfection with a kaleidoscope of romantic and stunning settings and venues that will satisfy the most discerning and exotic of tastes. Fiji is the perfect hideaway and ideal extension to your New Zealand adventure. Your tour will include two nights at the luxury SOFITEL RESORT, a day with the Koroipita community doing a project with them to enhance their lives, and a catamaran ride on the azure waters with a two-night stay at PLANTATION ISLAND RESORT, nestled on the island of Malolo Lailai, for the ultimate in relaxation.

The North Island is always warmer than the South Island, except in the middle of the summer when the South Island is usually hotter. New Zealand is a mountainous country, surrounded by ocean. The ocean environment provides a mild climate with very few extremities, while the combination of mountains and westerly winds account for remarkable climatic differences, especially in rainfall and temperature from west to east. Majestic mountains form a barrier to the winds and are the major factor controlling rainfall. New Zealand’s spring season runs from September to November, summer from December to February, autumn from March to May and winter months extend from June to August.

Fiji has a warm tropical climate year-round, with best months being late March through December. Temperature is between 75 and 90 degrees year-round, with a cooling trade wind for most of the year. The wet season is normally from November to April, with heavy, brief, localized showers. 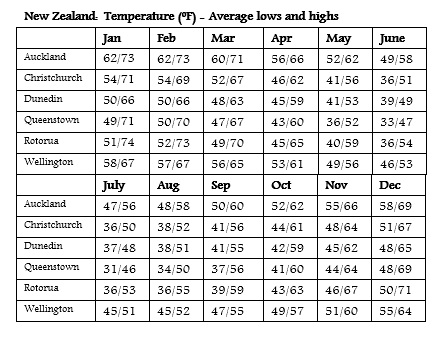