India’s romantic culture, storied past and natural beauty come alive on this classic tour through some of its most alluring sites. Indulge your senses with old-world glamour and ancient traditions. Revel in the vibrant hues of saffron, orange, magenta and turquoise as sari-clad women sweep past you. Discover a wealth of artistic and architectural treasures amidst modern city streets, winding alleyways and rural landscapes. Recount centuries of great imperial rulers, spiritual devotion and legends at such famed sites as the Taj Mahal, Amber Fort, Varanasi and Khajuraho’s erotic temples. Search for the magnificent wild tiger amidst crumbling monuments in the former hunting grounds of royals. This is India as you’ve never imagined it – and will never forget! 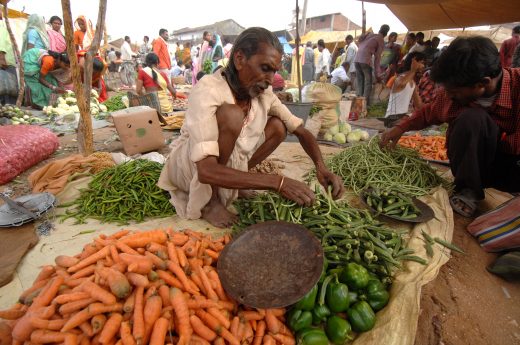 Your journey begins as you board your overnight flight to Mumbai. Arrive the next evening, where you will be escorted to your luxurious hotel, majestically hugging the harbor and overlooking the Gateway of India. Spend your next day exploring Mumbai. First stop, Elephanta Caves, a UNESCO World Heritage Site, located a short boat ride from Mumbai. Marvel at the exquisite carvings dating to the 7th century. Return to Mumbai and begin your city orientation tour starting at the beautiful Afghan Church, the Secretariat of the Maharashta Government and drive down the famed Marine Drive. Visit the Gateway of India, and the unique Dhobi Ghats, with row upon row of concrete wash pens. Tonight, enjoy a welcome dinner at your hotel. TAJ MAHAL PALACE & TOWER.
(B,L,D)

Fly to Varanasi – also known as Banares – one of the oldest cities in the world dating back 3,500 years and one of the seven sacred cities of Hinduism. Home to the holy shrine of Lord Kashi Vishwanath it is one of only 12 shrines in India to Lord Shiva. These few lines by Mark Twain say it all: “Benaras is older than history, older than tradition, older even than legend and looks twice as old as all of them put together”. Visit Sarnath, where Buddha preached his first sermon about enlightenment and tread in his footsteps while taking a stroll in Deer Park. Gaze at the Dhamekha Stupa – a majestic structure with beautifully carved stonework. Watch the Hindu ritual of Aarti performed at sundown, and take a ride through the chaotic roads of Varanasi by rickshaw. Greet the next day with an early morning boat cruise on one of the most sacred sites – the holy river Ganges, visit various beautiful temples and pass by old-world shops filled with exquisite handmade silks. THE GATEWAY HOTEL GANGES.
(B,L Daily)

Take to the skies as you fly to Khajuraho and tour the Eastern group of the famed Temples. These enchanting structures, now a World Heritage Site, are considered the high point of medieval Indian architecture and offer a fascinating insight into the country’s spirituality. Each shrine is dedicated to a Hindu deity or the Jaina pantheon, and all celebrate the sublime beauty of everyday life. You will be inspired by the complex spires, erotic imagery and intricately carved sculptures depicting ordinary villagers – farmers, musicians, women applying make-up, etc. Located within the vicinity of the Khajuraho Temple, with marvelous views of this World Heritage site, your exquisite hotel has contemporary décor with an Indian motif. LALIT GRAND TEMPLE VIEW.
(B,L)

Tour the spectacular Western Temples of Khajuraho before driving to the medieval town of Orchha to visit its impressive palace complexes. Continue to Jhansi to board the Shatabdi Express to Agra. Combining old-world splendor and modern amenities, your hotel is situated only a mile away from the Taj Mahal. ITC MUGHAL.
(B,L)

Once the capital for several ruling dynasties, Agra is known for its glorious past and eclectic architecture. Perhaps no other monument has evoked as much awe and admiration as the Taj Mahal – the ultimate requiem of love, it was built by Emperor Shah Jehan in memory of his favorite wife. The stunning marble and perfect symmetry are particularly stunning at sunset, when the mausoleum reflects a kaleidoscope of hues. Throughout Agra you’ll find a world of discovery, with monuments, majestic buildings and exquisite arts and crafts, priceless legacies of a resplendent history. ITC MUGHAL.
(B,L)

The chaotic scenery of rural India offers fascinating cultural insight along a drive to the 16th century, red sandstone city of Fatehpur Sikri. Continue to Bharatpur to board the Jan Shatabdi Express for Ranthambhore National Park, one of the best places in the world to see tigers in the wild. The remarkable scenery encompasses crumbling monuments and living temples within the wild beauty of deciduous forest. On twice daily safari expeditions, look for tigers, jackal, mongoose, sloth bear, leopard, Sambar, spotted deer and marsh crocodile. Home to 272 bird species, the Indian Gray Hornbill is commonly sighted in pairs. A royal hunting lodge from the 1930’s, your home is a historic and rustic hideaway. SAWAI MADHOPUR LODGE.
(B,L,D Daily)

Explore the “Pink City,” with its imperial history and tales of grand Mughals, British dignitaries and even U.S. Presidents. Undoubtedly a city of royals, Jaipur draws thousands of travelers enchanted by its fabled past, timeless architecture and thriving traditional crafts, many from the 18th century. Attractions include the Amber Fort with its rugged walls, elegant palaces and gardens; the City Palace complex, the former residence of the royal family; the Palace of Winds with its intricate carved trelliswork; and Jantar Mantar, the largest observatory of its kind in the world. ITC RAJPUTANA.
(B,L Daily)

Board your flight to Delhi, India’s capital and political hub. Settled seven times over the centuries, this ancient city has something for everyone: history, architecture, religion, shopping and cosmopolitan culture. In Old Delhi, you’ll find a labyrinth of streets crowded with rickshaws; the Jama Masjid, the largest mosque in India; the Red Fort; and Raj Ghat, a memorial for Mahatma Gandhi. In New Delhi, view Qutab Minar built in the 12th century, Emperor Humayun’s tomb, India Gate, the Presidential Palace, Parliament and the Secretariat buildings, an interesting blend of Victorian and 20th century architecture. On the second evening, board your flight back home, bringing with you memories of this old world. THE GRAND NEW DELHI.
(B,L; B,L,D)

Extend your journey and discover the riches of Rajputana. Begin in Pushkar, a tiny town with 400 temples along the picturesque and sacred Pushkar Lake. Experience a camel ride through the local bazaar and dip your fingers into the mystical waters. Tour Jodhpur’s powerful Mehranghar Fort and learn about the region’s unique local cultures. End your journey in Udaipur, with is spectacular temples and palaces filled with art, exceptional architecture and resplendent history.
(B,L; B,L,D, Meals Aloft)

Pricing: Per person, based on double occupancy

Maximum group size: Although larger groups can be accommodated, we recommend a maximum of 35 travelers.

India is best visited during winter – October through March. During this time, there’s hardly ever any rain, and the days are warm – not hot – while the evenings are cool. During summer, it can be very hot, which is also the time of the monsoons, with a substantial amount of rainfall. It can be foggy in Delhi during the winter months. For our South India program, for best viewing of wildlife at Nagarahole, April/May is recommended, when the elephants congregate at the banks of the lake and can be seen in massive herds. It is warm, but the wildlife viewing warrants it. For our Wild India program, the parks close between June and mid-October when temperatures can soar to 120 degrees. For our Little Tibet program, this part of India is best visited June through September. Because of the high elevation and winding mountain roads, driving the rest of the year could be treacherous and it will be quite cold. June through September, the average temperature ranges from the low 60’s at night, to the high 80’s during the day. Delhi at this time of year will be quite hot and possibly rainy – temperature could be around 100 degrees. 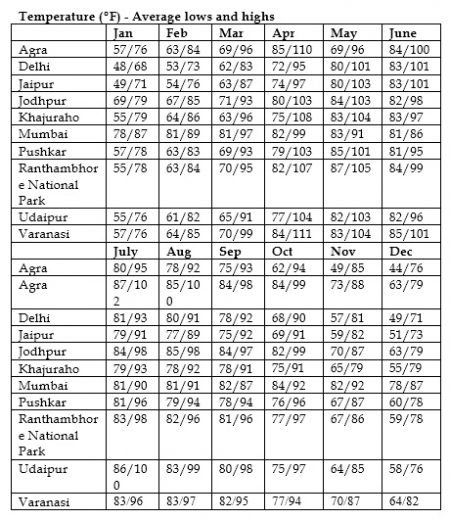