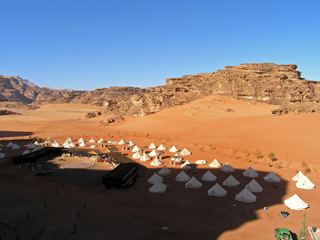 Your journey begins as you board your overnight flight to Amman.

Upon arrival, you will be met by your specialist guide and driver and escorted to your hotel. Amman, the capital of the Hashemite Kingdom, is known as the “White City” because of the white sandstone used to build houses. As you drive through this vibrant city you’ll see great contrasts between the modern and traditional.

The rest of your day is at leisure to relax, enjoy the facilities of your hotel, and get ready for your upcoming adventure. Tonight, enjoy a welcome dinner at the Wild Jordan Restaurant.

Your home for the next two nights is the elegant Grand Hyatt, conveniently located in the heart of the capital’s stately business and diplomatic district. Each of the 311 rooms and suites feature the latest in modern conveniences combined with traditional Arabesque ornaments, offering the ultimate in luxurious accommodation in the city. Overnight at the GRAND HYATT AMMAN. https://www. amman.grand.hyatt.com/

Drive out of Amman this morning to ancient city ruins of Um Qais, tucked away overlooking the Sea of Galilee. Wander through impressive Corinthian columns, Ottoman village homes and a Roman basilica. Continue to the castle of Ajloun constructed in 1184 boasting views of terraced farmlands. Marvel at its rambling corridors and staircases replete with ‘murder’ holes – through which tar or pitch greeted hapless invaders.

Enjoy lunch at the Artemis restaurant and head to Jerash, one of the most complete surviving examples of a provincial Roman city with ruins dating back to the Neolithic Age. Jerash, part of the Decapolis, has been called the “Pompeii of the East” for its unique state of preservation. The city features theaters, churches, temples (Zeus and Artemis), a Nymphaeum and colonnaded streets. Proceed to the Saracen castle at Ajlun, a 12th-century castle built by Saladin in his successful campaign to drive the Crusaders from Jordan in 1189, and an outstanding example of Arab and Islamic military architecture. Drift back in time almost 6500 years as you walk along colonnaded streets to see baths, plazas and arches in pristine condition. Return to Amman where the rest of your day is at leisure. Overnight at the GRAND HYATT AMMAN.

Depart today for Petra by way of the Kings’ Road. En route, you’ll visit Madaba, where you’ll see the oldest map of the Holy Land, one of many beautifully preserved mosaics on the floor of Saint George’s Church. Madaba, or Medeba in antiquity, features many famous mosaics in public and private buildings. After Madaba, a short drive will bring you to Mt. Nebo, the alleged burial site of Moses, overlooking the Jordan Valley and the Dead Sea. Here Franciscans have built a structure that protects a 4th – and 6th – century Byzantine church. Thereafter, you’ll continue through the scenic canyons of Wadi Mujib to the Crusader Castle at Kerak. This12th – century hilltop fortress features well-preserved galleries, towers, chapels and ramparts from the era of the Crusaders. Continue to Petra.

Dinner at Petra Kitchen is a delightful way to round up your Jordan travel experiences. Like any home kitchen, the Petra Kitchen is a relaxed, informal atmosphere where you’ll gather to prepare an evening meal, working alongside local women under the supervision of an experienced chef. Each evening meal includes soup, cold and hot Mezza, salads and a main course—all typical Jordanian dishes. You will get an inside glimpse of the secrets behind the famous regional cuisine of the Levant. Petra Kitchen offers an evening of learning, fun and a very special dining experience, with each dish gaining the special flavor of a reward well-earned. Great care has been taken to make Petra Kitchen a truly Jordanian experience—right down to the furnishings, all crafted in Jordan, the tableware, all produced by the Iraq al Amir Women’s Co-operative, and the aprons and table linen, all hand-embroidered by the Jordan River Foundation.

In Petra, your home for the next two nights is the Moevenpick Hotel. Located at the entrance to Petra site, this 183-room luxury hotel boasts authentic antiques, artwork, and fine gold inlay. It is one of the most notable hotels in the Middle East and a recipient of the Aga Khan award for outstanding Islamic architecture. Overnight at the PETRA MOEVENPICK HOTEL. http://www.moevenpick-hotels.com/en/pub/hotels_resorts/worldmap/petra/welcome.cfm

Next day, depart for a full day tour of Petra, the soul stirring, rose-red city and Jordanian national treasure, designated as a UNESCO World Heritage Site. Petra was an ancient Nabataean capital settled by industrious Arab traders more than 2,000 years ago. Petra’s unique location enabled the Nabataeans to dominate the ancient Arabian trade routes, and the city became wealthy from the tolls it levied on the caravans that sheltered there with their precious cargoes of spices, silks, ivory and animal hides. In the ancient world, Petra was renowned for its refined culture, massive architecture, and ingenuous system of dams and water channels. In the years following the Emperor Trajan’s annexation of Petra, the city declined and slipped into obscurity until it was “discovered” in 1812 by a Swiss traveler. Excavations that revealed the astounding workmanship and the incredible ruins at Petra did not begin until 1924. Ongoing excavations continue to reveal more information about the Nabataean Kingdom.

Petra still forms part of the domain of the Bedouin. You will see them with their horses and camels as you begin your unforgettable trip into this cultural landmark. After passing tombs outside the city, you come to the “Siq,” an immense crack in the Nubian sandstone almost one half mile long. This winding fissure separates overhanging cliffs that appear to meet 300 feet overhead. Near the end of the passage, the Siq makes one last turn and out of the gloom Petra’s most impressive monument Al Khazneh (The Treasury) appears in the sunlight. One of the most elegant remains of antiquity, Al Khazneh is nearly 140 feet high and was carved from the mountain’s solid rock in the First Century B.C. originally used as a Nabataean king’s tomb; Al Khazneh was later used as a Nabataean temple. Film buffs will recognize it from its starring role in the final scenes of the movie Indiana Jones and the Temple of Doom.

This morning drive to Wadi Rum. Enjoy a short 4×4 tour inside the desert and enjoy sundowners watching a glorious sunset when the sun paints the desert with hues of red and gold and fantastic shades of colors.

Wadi Rum, the majestic, mountainous desert located in the far south of Jordan, was named this summer to UNESCO’s World Heritage List. The Wadi Rum protected area, which includes more than 275 square miles of sweeping dunes and dramatic, sheer-sided mountains, has become one of Jordan’s top tourist attractions. It is also home to many of Jordan’s traditional Bedouin tribes, as well as a number of archaeological sites dating from the prehistoric periods to the Islamic era. Particularly prominent are inscriptions and carvings dating to the time of the Nabataean kingdom of Petra, which controlled the trade routes that passed through the region more than 2,000 years ago.

You will be staying in a Bedouin tent built deep inside the desert away from lights, traffic, crowds and noise. While an amazing experience as you’ll truly understand how the Bedouins live, the conditions are remain quite nice – you’ll be staying in luxury tents, each spacious guest tent is luxurious furnished completed with comfortable king-size or twin beds, Bedouin sofa, mirrors, lamps, and the finest bed linens. Tonight, enjoy a special Bedouin feast at your camp. Be aware that no alcohol is served, but you’re welcome to bring your own and discreetly consume it. Overnight at WADI RUM NIGHTS CAMP. http://www.wadirumnight.com/

Start early this morning & bid farewell to Wadi Rum and head to Lot’s Cave. Located at the tip of the Dead Sea, this ancient cave is believed to have been used as a sanctuary by Lot and his daughters after the destruction of Sodom. Continue on to Bethany, the Baptism site at the Jordan River. The excavations conducted at Bethany have uncovered a I century A.D. settlement with plastered pools and water systems that were used almost certainly for mass baptisms, and a V-VI Century Byzantine settlement with churches, a monastery, and other structures most probably catering to religious pilgrims. A survey made about the site has documented an ancient sacred pilgrimage route that linked Jerusalem, the Jordan River, Bethany “beyond the Jordan” as it is clearly mentioned in the Gospels, to separate it from the “within” the Jordan, that is Jerusalem and the Holy Land, and Mount Nebo. John the Baptist started his mission in the land of modern Jordan, here baptized Jesus, and also ended his life: arrested by Herod Antipas, imprisoned in the fortress of Machareus and beheaded upon the request of Salome, Herod Antipas’ step daughter (Mark, 6:17-29).

Resume your drive to the Dead Sea and your fabulous resort. In the afternoon, enjoy the Dead Sea beach for mud wrap – the perfect way to end your Jordanian adventure.

Set on the northern shores of the Dead Sea at the lowest point on earth, your deluxe resort offers a soothing, therapeutic atmosphere with an oriental flair. The hotel provides uninterrupted views across the vast sea towards the west bank and access to some of the most beautiful scenery in the world. Each room comes equipped with a private bathroom, and a balcony or terrace where you can enjoy these special views. Overnights at the KEMPINKSI ISHTAR HOTEL. https://www.kempinski.com/en/dead-sea/hotel-ishtar/

Your last day is at leisure. Float in the salty waters of this historical site and enjoy the wonderful facilities of your hotel and world class spa. Overnight at the KEMPINKSI ISHTAR HOTEL.
(B)

Transfer to Amman this morning for your flights back home bidding farewell to Jordan. Arrive home eager to share memories and photos with your family and friends.
(B, Meals Aloft)

The main characteristics of Jordan’s climate reflect the transitional location of the country between the Mediterranean climate in the West and arid climates in the East and in the South. Jordan thus has a temperate, semi- and subtropical climate which is well suited to travel for most of the year. It can be quite cold in January-February and hot in July-August.
x