Journey to the ‘Rainbow Nation’ on this incredible adventure to South Africa. Start in South Africa’s ‘Mother City’, Cape Town, with staggering views from the top of Table Mountain, a wealth of conservation and wildlife, sprawling botanical gardens, teeming aquariums, and the rugged beauty of the Cape peninsula. In Grootbos, discover ‘big five’ at sea – whale, dolphin, penguin, seal and great white shark. Bask in the glory of the winelands and visit award-winning vineyards. Jump into the wilds, away from the bustle of humanity, and uncover the world of the the ‘big five’ on land – lion, elephant, buffalo, rhino and leopard. This is your chance to get an up-close look at one of the most awe-inspiring destinations on earth!

Fly to Cape Town, South Africa’s “Mother City.” Next day, start your adventure with a coastal drive to the Cape of Good Hope surrounded by spectacular mountains, rugged shorelines and the blue sea below. Stop at Hout Bay and take a boat ride to the seal colony. See Devil’s Peak, Lion’s Head, Table Mountain, and the Twelve Apostles en route to Cape Point where you can climb the steps or ride a funicular to the top, and explore the Cape Point Nature Reserve which is host to approximately half of the 2,700 species of indigenous plants contained in the Cape Peninsula. Stop at Boulders Beach where the braying African (Jackass) Penguins can be seen up close. End the day with a guided tour of Kirstenbosch Botanical Gardens, , featuring 9,000 of the estimated 20,000 species of indigenous South African flora, and close to 50% of the peninsula’s floral wealth. Enjoy dinner at the Two Oceans Aquarium alongside sharks, penguins, turtles, frogs, and a huge variety of fish and sea plants. VINEYARD HOTEL.
(Meals Aloft;Breakfast, Lunch, Dinner)

Ride the cable car to the top of Table Mountain, the signature of Cape Town’s skyline. For nature lovers, the birding at the top is incredible, and the wild flowers include agapanthus, watsonias and red nerines which poke out from rock crevices amid a scrub of ericas and gnarled proteas. In the afternoon, visit the Southern African Foundation for the Conservation of Coastal Birds (SANCCOB). This non-profit seabird rehabilitation center is internationally recognized, and has treated over 85,000 birds since inception in 1968. In addition to rehabilitation, especially for threatened species, they aim to raise awareness about conservation through education. VINEYARD HOTEL.
(Breakfast, Lunch)

Start your day with a visit to Harold Porter gardens, a beautiful, secluded area set between mountain and sea, with several miles of nature trails providing scenic views of forests, mountains and coastline. Then, head to Grootbos Nature Reserve, which conserves 4,200 acres of pristine fynbos, the Cape’s unique vegetation type. Within its borders lies a wealth of more than 650 species of indigenous plants. The coastline offers a marine experience like no other. In season, see 40-ton southern right whales only few feet from your boat. Travel to the island refuge of huge sea bird colonies and admire the underwater antics of a 60,000 strong Cape Fur Seal colony. Take in the awesome spectacle of a great white shark breaking the surface. The cliffs of Walker Bay, right at your doorstep, offer the best land-based whale viewing in the world. Watch spellbound as mothers, calves, and energetic bulls come to within 30 meters of the rocky shoreline. Explore the reserve on foot, horseback, or in an open 4×4 vehicle. Take a stroll through one of the afro-montane forests. Venture out on a whale watching/marine discovery cruise, where you will have the opportunity to view southern right whales and other marine life, including African Penguins, sea birds, seals, great white sharks, and dolphins. At an additional cost, you can opt to face danger up close with a great white shark cage diving expedition. GROOTBOS FOREST LODGE.
(Breakfast, Lunch, Dinner Daily)

Head to Stanford and board the African Queen for a birding cruise down the Klein River, with breathtaking views of the Klein River Mountains and more than 127 species of birds, animals, and fish. Continue on to Hamilton Russel Winery for a tasting, followed by lunch at Forage at the Wildekrans Wine Estate. Products used by the chefs are foraged and sourced from local artisans and farmers within a 100km radius of the restaurant. End the day in Franschhoek, nestled in the “Valley of the Huguenots” where the French first settled in 1688. Next morning, stop at the University town of Stellenbosch to tour the historic estate of Boschendal for an introduction to some of the most brilliantly-preserved Cape Dutch buildings in the region. Enjoy a drive in this town where oak-lined streets next to water furrows compliment the many fine examples of elegant Cape Dutch, Victorian ,and Georgian architecture – all part of this unique “Town of Oaks.” Lunch at Babylonstoren, a 300-year-old Cape Dutch farm, with a garden divided into 15 sections, filled with edible produce, gorgeous flowering plants, a maze of prickly pears, and plenty of room for roaming livestock like ducks and chickens. LE QUARTIER FRANCAIS.
(Breakfast, Lunch Daily)

Return to Cape Town for your flight to Johannesburg to board a light aircraft flight to Madikwe Game Reserve, in search for the ‘big five’ – buffalo, lion, leopard, elephant, and rhino. Madikwe is home to 66 mammal species and approximately 300 resident and migratory bird species. In addition to the ‘Big Five,’ hippo, giraffe, wild dog, hyena, and cheetah can also be seen here. Due to its closeness to the Kalahari Desert, there’s an overlap of a number of species, offering guests more diversity in wildlife viewing. Madikwe is also host to a number of large antelope, such as eland, gemsbok, sable, and nyala. Smaller buck species such as springbok, oribi, duiker, and klipspringer can also be found here alongside honey badger, otter, serval, fox, meerkat, antbear, baboon, porcupine, warthog, bushbaby, and hedgehog. MADIKWE LELAPA LODGE.
(Breakfast, Lunch, Dinner Daily)

Time to return home, bringing with you the indelible memories of all the wonderful sights of South Africa.
(Meals Aloft)

Spend a night in Johannesburg at the D’OREALE GRANDE HOTEL, conveniently located close to the airport at a complex of restaurants, shops, and beautiful gardens. The next day, another adventure awaits you as you fly to Victoria Falls. Five separate cascades plunging more than 300 feet with a thunderous roar comprise this awesome spectacle; the world’s largest waterfall. Feel the mist on your face during a guided tour and enjoy a sundowner cruise along the Zambezi River. Visit a native village to experience their way of life and shop in the African marketplace for those last-minute souvenirs. Stay at the fabulous, Edwardian STANLEY & LIVINGSTONE HOTEL, right on the border of Zambezi National Park, where you can use your time at leisure to lounge on the grounds or head into the bush for close encounters with a variety of African wildlife, including rhino.

Maximum group size: 24 travelers. Madikwe Lepala only has 12 suites. If group is larger, they also have two smaller camps of 4 rooms each; thus the total size can be 20 rooms or 40 travelers.

No matter when South Africa is visited, it is a stunning country and one is sure to delight in its offerings. South Africa is affected by the waters surrounding the country on three sides, and thus there’s variation in the weather pattern depending on what part of the country visited. In Cape Town, the winter months (June-August) are mild and changeable; this is also the time when most of the rainfall occurs in the Cape. Summer months (January-March) around Cape Town are generally dry. On the high veld, in the center of South Africa around Johannesburg, there are sharp differences of temperature between day and night and it can be quite cold during the winter months. During the summer months at Kruger (December-March,) there can be sporadic rainfall in the form of quick thunder showers, but wildlife viewing is superb no matter when visited. April through August represent the winter months in Southern Africa which in turn means very little rain in most of the country, except for the Cape. South Africa is incredible to visit, particularly the Cape, during the Spring, when the wildflowers are in bloom – generally midAugust through September. Marine enthusiasts should consider visiting between June and November when the Southern Right Whales congregate in the waters. 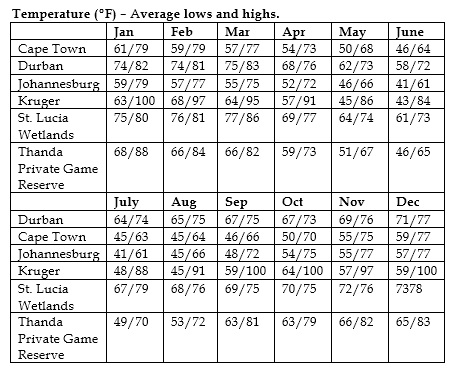