Discover the superlative nature of Australia where in one amazing journey you will see the oldest, biggest, brightest and bluest. Experience the exhilarating beauty of the ‘land down under’ from a riverboat cruise through Daintree – the oldest living rainforest in the word, to snorkeling along the Great Barrier Reef – the world’s largest living organism, to the kaleidoscope of color in Melbourne’s sanctuaries and lovable Fairy Penguins, to spectacular views of Sydney’s Harbour. Mingle with the warm and friendly people while strolling around the tropical city of Cairns, and feel the vibrancy of Sydney – the country’s cosmopolitan city, as well as Melbourne and Canberra, Australia’s capital. 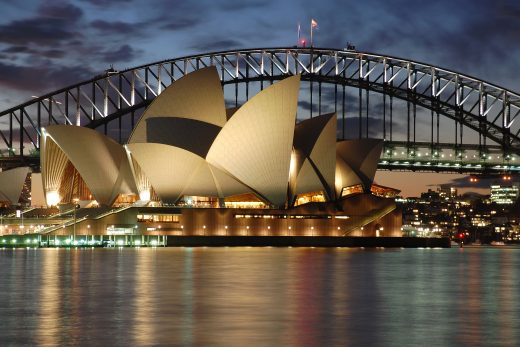 Fly from Los Angeles to Australia, crossing the International Date Line and losing a day. Arrive Cairns, where you are escorted to your luxury hotel overlooking the picturesque Coral Sea on the Cairns Esplanade. The rest of the day is yours to relax or explore the city. Tonight, enjoy a welcome dinner. RYDGES ESPLANADE RESORT CAIRNS.
(Meals Aloft, D)

Take the boardwalks through the canopy and rainforest floor, providing an exhilaratingly close view of flora and fauna including Boyd’s forest dragon, Eclectus Parrot and green tree frog. Discover the mysteries of the 110-million- year-old Daintree Forest. On your Daintree River cruise, you may see tree kangaroo, flying fox, cassowary, dragon lizard and saltwater crocodile. There are over 455 bird species here, including the Little and Azure Kingfishers. Stretch your legs on a guided stroll of Mossman Gorge with its crystal-clear water cascading over smooth granite boulders. RYDGES ESPLANADE RESORT CAIRNS.
(B,L)

Board the Reef Magic Cruises fast catamaran to explore the 1,260-mile coral reef, home to 1,500 species of fish, 350 types of hard coral, 5,000 varieties of mollusk, thousands of invertebrates and diverse birdlife. The all-weather Marine World platform caters for all activity levels. Snorkel in the sheltered coral lagoon, go scuba diving or join the Marine Biologist on a guided snorkel safari. Enjoy the reef from the semi-submersible reef viewer, glass bottom boat or underwater observatory. Lunch will be served on board. Next day is at leisure. A trip to the tiny mountain hamlet of Kuranda is available (at additional cost) via one of the most scenic rail rides in the world. Travel back to Cairns at treetop level on the Skyrail Rainforest Cableway with a stop at the cultural heritage complex, home of the world-renowned Tjapukai Aboriginal Dance Theatre. RYDGES ESPLANADE RESORT CAIRNS.
(B,L; B, L if taking Kuranda tour)

Fly to Melbourne, Australia’s second most populous city with a distinct style of its own. Tonight, enjoy an early three- course meal on the 1948 Colonial Tramcar Restaurant, featuring fresh local produce prepared on board the tram. One of Melbourne’s star attractions, it offers a sightseeing tour with a difference and two essential Melbourne experiences: taking a tram ride and eating great food. You’ll glide through the city streets , your privacy assured with one-way windows. Your boutique hotel was built in 1928 and was lovingly restored in every detail of the prevailing Art Deco fashion of the time. VIBE SAVOY HOTEL MELBOURNE.
(B,D)

Discover Yarra Valley, for wine tasting at De Bortoli Winery, and feast on Prime Aged Charolais Beef cooked on the spit and wine tasting at the Ferguson Winery. Continue to Healesville Sanctuary, on 70 acres of bushland in the heart of the Yarra Valley, world-renowned as the best place to see Australian wildlife in their natural habitat: koalas, kangaroos, wombats, emus, dingoes, birds of prey and platypus. Then, head to Phillip Island with entry to Churchill Island Heritage Farm, the Koala Conservation Centre and the Penguin Parade . Your next day is at leisure to discover Melbourne on your own, from the fabulous Botanical Garden, The Melbourne Zoo, to world-class museums and shopping. VIBE SAVOY HOTEL MELBOURNE.
(B,L; B)

A short flight takes you to Canberra, Australia’s capital and largest inland city. Visit the Parliament House and the Australia War Memorial Museum. Continue to Gold Creek, a working pastoral property which currently runs merino sheep and beef cattle. You will be welcomed with refreshing country hospitality by Craig and Sandra Starr. Watch Australian kelpie dogs work merino sheep and see a sheep shearing demonstration along with a BBQ lunch. Afterwards, drive to Sydney, Australia’s largest metropolis with a population of over 4 million. Your elegantly restored heritage listed art deco hotel was built in 1930 and is situated in the heart of downtown Sydney. THE GRACE HOTEL.
(B,BBQ L)

Be touched by the most ancient human culture on earth in a 90-minute leisurely walkabout with an Aboriginal guide in The Rocks, and journey into DreamTime, the culture of Aboriginal People. Discover how the ancient Aboriginal dreaming is still alive within the modern Sydney landscape and how the billion-year-old harbour, marine environment, sandstone strata, waterways, flora and fauna influenced how Aboriginal people lived in the area. Afterwards, learn about the history and magic of the Sydney Opera House on a guided tour which takes you beneath the iconic white sails of Danish architect Jorn Utzon’s world heritage listed masterpiece. This afternoon, enjoy high tea on a cruise of the Sydney Harbour; see the Harbour Bridge, Fort Denison, and magnificent waterfront homes. THE GRACE HOTEL.
(B, High Tea)

Your day is at leisure to explore Sydney on your own. An optional excursion (at additional cost) is offered to the Blue Mountains to see the world-famous rock formation – ‘Three Sisters.’ After a barbecue lunch in the Tree Fern Forest alive with the Kookaburra, drop into a hidden valley seeking out wild kangaroo. Enjoy a farewell dinner in the evening. THE GRACE HOTEL. (B; L if taking the Blue Mountain Excursion; D) Next morning, transfer to the airport for your return flight, crossing the International Date Line once again and regaining your “lost” day, arriving in Los Angeles on the same day you left Sydney.
(B, Meals Aloft)

Australia: Seasons in Australia and New Zealand are the reverse of those in the Northern Hemisphere. Australia is a big country, as big as the continental U.S., stretching from the tropics to much cooler temperatures, and it has a correspondingly wide range of climates. From April to September in northern and central Australia the days are clear and warm, with cool refreshing nights. At the same time in the south, days are cool with occasional rain but still plenty of sun. The weather in Sydney is much like that of San Francisco. It is possible to divide the continent into two zones – the tropical zone in the far north and the temperate zone in the south. The tropical zone experiences two seasons: the wet season between November and April, and the dry season May to October. The temperate zone experiences four seasons: Spring and summer from September/October to March and autumn and winter from April to September.

New Zealand: In New Zealand, the North Island is always warmer than the South Island, except in the middle of the summer when the South Is-land is usually hotter. New Zealand is a mountainous country, surrounded by ocean. The ocean environment provides a mild climate with very few extremities, while the combination of mountains and westerly winds account for remarkable climatic differences, especially in rainfall and temperature from west to east. Majestic mountains form a barrier to the winds and are the major factor controlling rainfall. New Zealand’s spring season runs from September to November, summer from December to February, autumn from March to May and winter months extend from June to August. 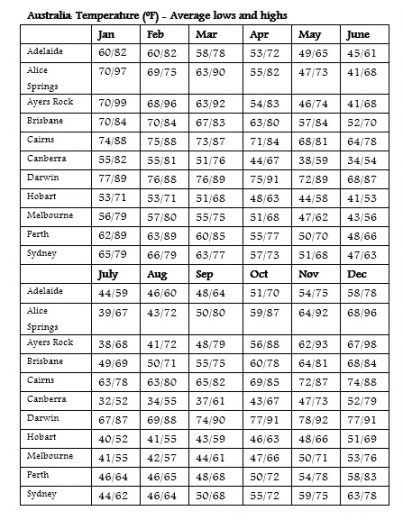