Adventure is wrapped in luxury in Botswana, where you wing your way from camp to camp on small planes.’ First stop, the Kalahari Desert and the otherworldly Makgadikgadi Salt Pans, where a glowing, white expanse of natural salt deposits create glittering mirages that seem to reach out into the horizon endlessly. Nearby the Nxai Pans are home to an array of animal and plant life, including the giant “upside down” Baobab trees that make the African skyline so spectacular. Then back on the plane for the most spectacular view over the Okavango. A wetland wilderness of looping channels, islands forested with palms and wide grassy floodplains, the Delta is home to a magnificent array of iconic birds and animals, from lion and elephant, to the ‘spirit of the Delta’, Pel’s Fishing Owl. End your adventure in Namibia’s Caprivi Strip, across from Chobe National Park, where your activities will be boating to see the abundant wildlife, visiting native villages, and discovering the wildlife of Chobe! 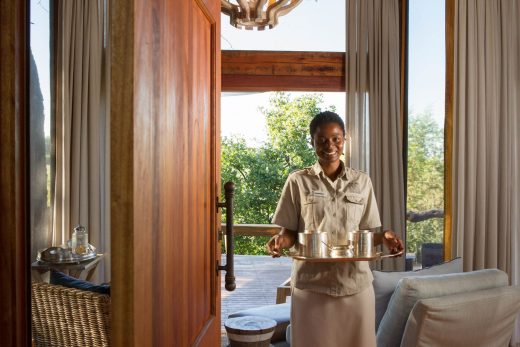 Get set for your adventure as you board your overnight flight to South Africa. Arrive Johannesburg next day, where you are escorted to your exquisite home offering a convenient location close to the airport coupled with lavish comforts. D’OREALE GRANDE.
Meals Aloft

Get set to discover the sweeping landscapes of Botswana as you fly to Maun, Botswana, and board a light aircraft to Leroo La Tau at the edge of Makgadikgadi Pans National Park, named for ancient Lake Makgadikadi that disappeared thousands of years ago. What remains is a collection of salt pans that cover approximately 6,200 square miles due south of the Okavango Delta. Next day, drive to Nxai Pan National Park, named for one of the salt pans that, along with the Ntwetwe, Sua, and Kudiakam pans, comprised the bed of the erstwhile Lake Makgadikgadi. These pans transform during the rainy season between July and October, when they fill with water and their stark whiteness becomes lush greenery. Year round, small populations of springbok, giraffe, and gemsbok can be found, but, during the wet season, their numbers increase significantly, and herds of zebra and wildebeest arrive bringing with them opportunistic predators such as hyena and lion. On your last day, drive to the nearby Khumaga Village for an enlightening cultural experience. Your stunning camp is situated on the banks of the Boteti River and commands superb views. LEROO LA TAU.
(All Meals Daily)

Take to the air again by light aircraft and fly to one of the world’s most distinctive regions and largest inland water system, the Okavango Delta. Xakanaxa is in the Moremi Game Reserve which occupies an area where the life-giving waters of the Okavango River give way to the arid expanses of the Kalahari Desert. Stands of Mopane forests cover islands separated by papyrus lined waterways filled with the chatter of a thriving bird population. In the open grassland portions of the reserve, the elusive wild dog uses its wiles to capture a meal whilst the cheetah relies on its prodigious speed, and you may be lucky enough to see both. Activities here center around mokoro (dugout canoe) rides, boat excursions, and game drives. See the Delta from water level and relax as you glide through quiet reed-lined channels. Birding is excellent, with Pel’s Fishing Owl and Wattled Crane being the prized specialties to look for. In all, more than 600 species reside within the 7,000 square miles of islands, marshes, flood plains, and channels of which the Okavango is comprised. You’ll be enthralled by the goings on of the delta residents: a hippo watches you from a deep pool, young baboons race around a sausage tree, a Lilac-breasted Roller flits from branch to branch. CAMP XAKANAXA.
(All Meals Daily)

Your last flight by light aircraft will take you to Kasane, where you cross the border and boat to your camp, situated in East Caprivi, Namibia, on the northern bank of the Chobe River, overlooking the vast floodplains of Chobe’s Puku Flats. The area is renowned for its diverse and prolific wildlife, including the rare puku antelope. It is home to large herds of elephant, buffalo, and hippo, as well as concentrations of other wildlife, including giraffe, Sable, wild dog, lion, and other predators, which come down to the river’s edge to drink, graze and hunt. Activities at the lodge are diverse and interesting. In addition to a game drive by open 4×4 vehicle in Chobe National Park and private motor boats for water born game viewing, you’ll also experience something different: guided walking safaris along the river by professional guides, boat excursions to a nearby traditional village where one can witness tribal African life, guided canoe excursions in Canadian style canoes and night game drives along the river. The waters around Savanna are renowned for outstanding Tiger and Bream fishing. Fishing trips accompanied by proficient guides, together with the necessary fishing tackle can be arranged. The main lodge is the property’s focal point – an open-sided building that features a 270-degree view over the Chobe River and beyond to Chobe National Park and your individual chalets with private verandahs are delightful. CHOBE SAVANNA LODGE.
(All Meals Daily)

Today you transfer to Kasane for your return flights home, via Johannesburg.
(Breakfast, Meals Aloft)

Begin your journey with a delightful retreat in Cape Town, one of the loveliest cities in the world. Enjoy stunning accommodations at the historic TAJ CAPE TOWN. Ascend Table Mountain and take the coastal route to the Cape of Good Hope to discover charming seaside towns, spectacular wildlife, and the comical penguins at Boulders Beach. Tour the brilliant Kirstenbosch Botanical Gardens and spend a day in the famed Boland Valley wine region. Learn to prepare a Cape Malay meal at Bo-Kap and visit District Six Museum and Cape Flats. This is the perfect way to begin your adventure in Southern Africa.

End your safari in Zimbabwe on a three-night sojourn to experience the power of Victoria Falls, one of the Seven Natural Wonders of the World. This incredible spectacle — “The Smoke That Thunders,” as it is known to locals — is the world’s largest waterfall, with five thundering cascades plummeting more than 300 feet. Feel the mist on your face during a guided tour of the Falls and enjoy a sundowner cruise on the Zambezi River. Stay at the luxurious ELEPHANT CAMP and savor excellent cuisine and marvelous hospitality.

Botswana can be visited year-round. June-August is Botswana’s winter, and the mornings and evenings can be quite cold, the water levels are at their highest, and it is generally considered high season. However, the off-peak season, called the green season, also offers spectacular wildlife viewing and the pricing is best during that time of year.

On our Desert Sunset, Delta Dawn, Chobe Midday program, Leroo La Tau is perched on the cliffs of the Boteti River on the far western side of the Makgadikgadi Pans National Park. This River began flowing again in 2009 after more than 20 years of being dry and is one of the best places to witness Africa’s second biggest zebra migration. December-March the large herds of zebra & wildebeest have migrated to the pans away from the river, but our program includes a daytrip to Nxai Pan for an exciting chance to witness these large herds, including springbok, oryx and eland plus all those thousands of zebras that have migrated there for the season. Depending on the rains of the season, come April, the zebras begin the migration back to the river and the area surrounding the lodge as they come in search of water to drink when it dries up and evaporates from the pans. As the dry season draws in, so too do the zebra and wildebeest resulting in magical scenes of thousands of zebras galloping up and down the dusty river banks of the Boteti. You might even see some of the rhino that have been reintroduced to the region after being absent from the park for the over 200 years.

Camp Xakanaxa, in the Moremi Reserve has great game viewing year-round, and the lagoons of Xakanaxa and the Kwhai River are good for boating and mokoro rides. The rainy season here is November through March. The floods are highest during the winter months – June through August – when they arrive from the highlands of Angola. Chobe Savanna is on the Caprivi Strip in the Chobe ecosystem, on the Namibia side. The experiences here involve mostly boating, birding, walking and game runs into Chobe National Park.

At Victoria Falls, the water levels are high January through July on the Zambian side and diminish after that. For best viewing of the Falls, we recommend that travelers visit the Zimbabwe side between August and the end of the year – this tour can very easily be arranged at an additional cost if staying at the Zambian side of the Falls.

Summer in Cape Town (December through March) can be quite hot during the day, but it’s never uncomfortable as humidity is relatively low. Autumn (April/May) is warm with sunny days and lovely nights – and the best time to visit Cape Town. It can be rainy in Cape Town during winter (June-August), but it’s always pleasant and there are plenty of activities to be enjoyed no matter the weather. Spring (September-October) can be warm, but the evenings do cool off. This is another lovely time to visit Cape Town as it is not windy, the weather is lovely, and the wild flowers are in profusion. Overall, the winters are mild, spring and autumn fantastic, and the summers comfortable; Cape Town can be visited during any time of the year.