Unlike the wild kingdoms of the south, these creatures do not bask in sunny savannahs or mild wetlands. Instead, they carve their realm from the icy tundra of the Arctic circle, thriving in the world of the midnight sun and the unforgiving white veil of true winter. Here you’ll encounter the noble faces of the Northern animal kingdom, from blue whale to mighty walrus to the Lord of the Arctic himself, the Polar Bear. Sail among the isles of the Spitsbergen Archipelago in search of captivating landscapes and the hidden histories carved into the ice. Experience the rare and thrilling wildlife of this forbidding yet beautiful climate on the ultimate expedition to the Arctic Circle. 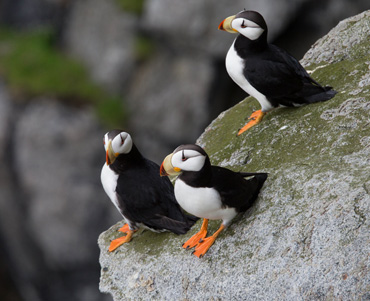 Fly to Oslo, the oldest of the Scandinavian capitals, with a history that goes back 1000 years, when the first settlements were built at the inlet of the Oslo fjord. The capital of Norway is known as the Viking city, the culture city, the winter capital, the city of rolling green hills and spectacular fjords. Oslo is full of historic sites, museums, parks, shops and a variety of restaurants. It is famous for its outdoor activities like ice skating, kayaking, cycling, hiking, sailing and skiing. Enjoy a welcome dinner at Lofoten Fiskerestaurant and meet your fellow travelers. CLARION COLECTION HOTEL BASTION.
(Meals Aloft; D)

Get set for a tour of Oslo that will cover all major sights such as the twin-towered City Hall and Akershus Castle which lies on a peninsula overlooking the harbor. The main street and city artery Karl Johanns Gate is located directly in between the Royal Palace and the Cathedral with the Parliament in the middle. You will visit the Vigeland Sculpture Park with sculptures of the creative designer Gustav Vigeland. Combine the city with a trip to the Bygdøy peninsula to visit one or more of Oslo´s many museums. Enjoy lunch at Sorgenfri Restaurant and then visit the Viking Ship Museum which has on display the bestpreserved Viking ships ever found, and the unique finds from the royal graves upon which the Viking ships were placed. Also visit the Fram Museum which shows the history of the polar explorers. Here you’ll find the world’s most famous polarship, Fram, from 1892, the museum’s main attraction. The ship is displayed in its original condition with interior and objects perfectly preserved. Last, visit the Holmenkollbakken (Ski Museum and Jump Tower) where from the top you can experience a 360-degree panoramic view of the city and fjord below. In addition, you will find the world´s oldest skimuseum and a ski simulator where you can launch down “Kollen” and see what it is like to ski some of the world´s toughest downhill ski slopes. CLARION COLECTIN HOTEL BASTION.
(B,L)

Transfer to the Airport for your flight to Longyearbyen, the gateway to your Arctic adventure. Spend the day in this charming town and enjoy dinner in Huset (Nordic tasting menu with flavors from Svalbard and the Arctic in Huset). RADISSON BLU POLAR HOTEL.
(B,D)

Your morning is at leisure to further explore this frontier town. In the afternoon, board your vessel and set sail toward Spitsbergen, embarking alongside an idyllic vantage point of the surrounding villages. Settle into your comfortable cabin and spend the evening relaxing or getting to know your fellow adventurers.

Each trip to Spitsbergen is unique, based on the elements of nature surrounding the time of year and weather patterns. As you arrive in the archipelago, your expert crew will immediately be on the lookout for wildlife viewing opportunities. This place is home to a host of remarkable Arctic creatures, including reindeer, Arctic fox, and walrus, with blue whale and dolphin cresting near the coasts. Birders will spot a delightful collection of avian life in Spitsbergen, including Little Auk, Northern Fulmar, and Thick-billed Murre. Of course, the search for polar bear is often the main event for wildlife enthusiasts, and viewings are common in this area, particularly in Phippsøya, which provides rich hunting grounds for these mighty beasts. This is also a key spot for walrus populations, and coming upon a large group of them is unmistakable with their honking cries as they slap and bump one another in search of the perfect sun basking spot echo against the cliffs. For a closer taste of adventure, you may book optional hiking or kayaking expeditions or go snow shoeing in the tundra. The landscape of these islands varies wildly from place to place, with massive glaciers alongside polar deserts and surprising tufts of green and blossoming flowers amidst the tundra. Snow shoeing is particularly good in Smeerenburg, where you can visit a memorial that’s over a century old, honoring the whalers who perished under the extreme conditions of the climate while at their work. Likely stops in the area include several major landmarks, such as the 14th of July Glacier, which is actually two glaciers, and is named to honor Bastille Day. The crew will also make its best efforts to land in the most popular destinations of the western coast, including Smeerenburg, Phippsøya, Alkhornet, and the Hinlopen Straight. The custom itinerary of every departure is built in real time to ensure those aboard get the most incredible wildlife viewing experiences, as well as insight into the history of the region, which has been settled several times and used for a variety of industries, including whaling and mining, before becoming the research-focused place it is today.
(All Meals Daily)

Enjoy one last meal with your shipmates before you disembark this morning. The time to say ha det (goodbye) has come. Your adventure ends as it began, in the frontierstyle settlement of Longyearbyen. From here, you’ll transfer to the airport for your flight to Oslo where you spend one more night at the CLARION COLLECTION HOTEL BASTION. Next morning, your adventure has truly come to an end as you board your flight home.
(B; B, Meals Aloft)

NOTES:
• The land program is suggested, but for groups that want to do something different, we can customize as needed.
• Pricing is dependent on the actual departure date and group size. We generally get group discounts that we pass on to our travelers and negotiate each group separately. Contact us for further details.
• We work with Quark Expeditions on our this voyage, but if there’s another vessel you’re interested in, let us know.

The Arctic is cold, even in summer – but probably not as cold as you think. In general, the more north one travels, the colder it gets. Summer (July/August) is characterized by continuous daylight and milder mean temperatures around 50°F. But the high reflectivity of the frozen ocean and the wind chill factor play an important role. Temperatures seldom fall below freezing but wind, rain or snow can occur at any time and fog is also very common.
x