Iceland – Volcanoes, Fjords, and Spas in the Land of ‘Fire & Ice’

Despite Iceland’s northern location, it is an unusually warm country, both in weather and in the hearts of its people. Active volcanoes provide natural spas throughout Iceland, glaciers and mountains dot the country providing many rivers flowing to the ocean, and the Gulf Stream warms the island. Discover this warmth for yourself in Iceland’s famous natural spas, on the trails of its mountains, waterfalls and volcanoes, and in the culture of its people. This trip is sure to leave an indelible impression, and fill your heart and soul with a type of Nordic happiness only Iceland can provide. 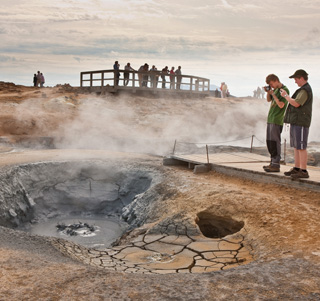 Fly overnight. Arrive in the morning at Keflavik International Airport, where you will be met by your guide and start your drive along the coast to see the Lighthouse of Reykjanesviti, one of the oldest lighthouses in Iceland, and glimpse the Island of Eldey, weather permitting. Close by is the country’s largest mud pool, Gunnuhver, named for a ghost in the region who was banished into the mud. The boiling mud is surprisingly loud and releases a smell you won’t soon forget. The next stop is the “bridge between the continents,” a small footbridge over a major tectonic fissure, which provides clear evidence of a diverging plate margin between Europe and North America. Continue onward, stopping to see the Rykjanes Peninsula and its lighthouse, the largest mudpool in Iceland, and the fishing village of Grindavik. Arrive at the Blue Lagoon, one of the most famous attractions in Iceland, where you’ll enjoy an authentic local breakfast before changing into your swimsuit and wading into the pleasantly warm geothermal waters of the lagoon. Dry off and transfer to your hotel near the Hengill Volcano, where you’ll have the rest of the day to relax and adjust to the brisk Icelandic air. FROST AND FIRE HOTEL.
(B,D)

Embark on a full day tour along the south coast of Iceland, one of the country’s most scenic regions, where you go as far as Vik, a charming village surrounded by beautiful, high bird cliffs. Along the way stop at the majestic Seljalandsfoss waterfall, where you can walk behind it and through to the other side. Also stop at the beautiful Skogafoss waterfall, with its 60-meter drop, and visit the Skogar folk museum to get a taste of how Icelanders lived in centuries past. Other highlights include views of the stunning Myrdalsjokull glacier, the black sand coastline and the impressive Reynisdrangar rock formations. HOTEL FROST AND FIRE.
(B,L,D)

Today you experience a true wonder of nature. Board a ferry in Bakkafjara and sail to Heimaey, the largest of the Westman Islands, and one of Iceland’s best kept secrets. Visit the puffin nesting area in Stórhöfði and walk up to the crater of a volcano that erupted only a few years ago, allowing the new lava fields to cultivate and create new flora. After lunch, by boat see astounding nature, colorful ocean caves, thousands of seabirds, and occasionally during the summer, pods of whales, and sail by Elephant Island, a massive rock formation that resembles an elephant. Enjoy traditional instrumental music as it echoes through the ocean cave Klettshellir. HOTEL FROST AND FIRE.
(B,L)

Explore the interior of Iceland as you drive along the Kjölur Mountain Road. This fascinating drive takes you by plateaus, lakes, and rivers, and is a feast for the eyes. Along the way, stop by the geothermal field of Haukadalur, known for its many geysers. View majestic Gullfoss waterfall, sometimes referred to as the “Golden Waterfall.” Explore Hveravellir with its hot springs and fumaroles. The next day explore Lake Mývatn, a shallow eutrophic lake close to an active volcano. The lake boasts a variety of water birds, particularly ducks. Gaze at the fascinating pseudo craters at Skutustadir, so named because they appear to be impacts or volcano eruptions, but are actually formed when lava crosses over a wet surface like a swamp, pond, or lake, causing an explosion of steam. Visit what is called Iceland’s most beautiful waterfall, and also known as the waterfall of the gods, Goðafoss, and explore Dimmuborgir, a large area featuring unique rock and cave formations. Dimmuborgir translates to ‘dark cities’ or ‘dark castles/fortresses’ and in Icelandic lore is said to connect Earth with infernal regions. HOTEL KEA.
(B,L,D Daily)

Your day starts with a tour of Vidimyri Church, a classic example of Icelandic architecture during the 19th century, when wood was in such short supply due to the lack of trees. The roof is instead turf or sod, and it is this unique roof style that gives these types of buildings their name – turf churches. Vidimyri is one of the best-preserved turf churches in all of Iceland. Then, embark on a short trail hike to the 3,500-year-old Grábrók Crater, a beautiful volcanic cone covered in moss sporting spectacular views over the lava fields. Next stop is the luxuriating Deildartunguhver Thermal Spring, the most powerful spring in Europe. It provides 180 l/second of 100°C hot water. Most of the water used for central heating in the towns of Borgarnes and Akranes is taken from Deildartunguhver. Your next stop is Sturlu-Reykir horse farm where you get to know the Icelandic horse and their gaits. Visit the stables, pet the horses, and perhaps take a selfie with a horse! The last stop today is at the stunning Hraunfossar watefalls (Lava Falls) before checking in at your enchanting hotel. HOTEL HUSAFELL.
(B,L,D)

Embark for an adventure to Iceland’s most significant, new attraction – the man-made Ice Cap Glacier. Experience the awesome glacial environment as you ride in a specially modified glacier vehicle. While there are a few man-made Ice Tunnels and Ice Caves in various places around the world, there is nothing quite like the Ice Cap glacier. Take a fantasy-esque journey to the center of the glacier to view the beautiful blue ice at the heart. Return to Reykjavik via the Kaldidalur Mountain Pass in Thingvellir National Park, the national shrine of Iceland and a UNESCO World Heritage Site. Tonight, gather one last time for your farewell dinner at a local restaurant. KEAHOTEL SKUGGI.
(B,L,D)

Bid Iceland goodbye as it is sadly time to return home. Transfer to the airport for your flight home.
(B)

Maximum group size: No restrictions, although we recommend a maximum of 35 travelers.

Iceland’s weather is cool and the Icelandic climate temperate. The warm North Atlantic Current ensures generally higher temperatures than in most places of similar latitude in the world. Iceland’s winters are mild and windy while the summers are cool. There are some variations in the climate between different parts of the island. Often times the south coast is warmer, wetter and windier than the north. Snowfall in winters is more common in the north of Iceland. There’s a seasonal change in length of day and night, creating unique weather phenomena. In midwinter, there is a period of no sunlight, and darkness prevails, called the Polar Nights. This is perfect to view one of the most beautiful phenomena: The Aurora Borealis (Northern Lights.) In midsummer, daylight takes over and there is no night darkness during June and July – this is called the Midnight Sun. 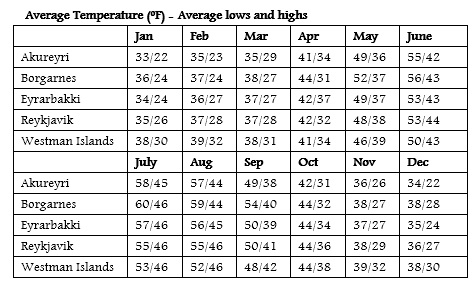