Sri Lanka is a place of sweet surprises where around each verdant bend lies the beautifully unexpected. The word serendipity stems from the ancient name for this island that bursts with life and each breeze here carries with it the hint of something savory and exotic. See ancient feats of architectural achievement while viewing works of art inspired by love. The national parks here are a wonderment of diversity which you will explore in search of Sri Lankan leopard and endangered sloth bear. In places, Asian elephants congregate in numbers found nowhere else in Asia. Taste tea as you never have before and take in the cinnamon air as you walk the streets of this country’s diverse cities.

Get set for your adventure as you fly to Colombo, Sri Lanka. On arrival you will be met by your expert guide and transferred to Negombo in time for a good night’s rest. JETWING BEACH.
(Meals Aloft, D)

Drive to Habarana, your jumping off point for Minneriya National Park where you will see Asian elephants in their natural habitat. The gathering of elephants in the park is the largest seasonally recurring concentration of wild elephants found in the world. Next day, visit Sigiriya, a fortress palace that rests atop a 700-foot monolith. Climb a narrow path through the remains of the Lion’s Gate and see ancient frescoes and the ‘Mirrored Wall’. Afterward, make your way to Polonnaruwa, the medieval capital of Sri Lanka, its impressively preserved ruins easily explored on foot. CINNAMON LODGE.
(B,L,D)

Motor your way to Kandy stopping in Matale for the spices and scents of the island. On to Kandy where among other things you will visit a gem lapidary and shop. This evening take in a Kandyan dance and visit the Temple of the Tooth Relic, reputed to house the left canine tooth of Buddha. EARL’S REGENCY HOTEL.
(B,L,D)

This morning travel to the Royal Botanical Garden in Peradeniya, featuring an astounding variety of orchids. Then on to Nanu Oya by train and transfer by tuk-tuk to Nuwara Eliya where you will note the palpable English influence in one of the most important tea producing regions in Sri Lanka. Next day, enjoy lunch and the Tea Experience tour and learn how to savor the various denominations of tea with a professional tea taster at the Heritance Tea Factory Hotel in Kandapola. Put your learned tea appreciation skills to use with an afternoon of leisure while taking in the refreshing climate of Nuwara Eliya. GRAND HOTEL.
(B,L,D)

Make way early and enjoy an afternoon safari at Yala National Park, which has the highest density of wild leopards in the world, herds of Sri Lankan elephant, and for bird enthusiasts, the few remaining breeding pairs of the Blacknecked Stork in Sri Lanka. Next day, awake early and head into the park and perhaps you will spy a leopard peering from behind a bush, or from a tree branch. After an afternoon respite, trek again into the woodlands for an opportunity to observe the comings and goings of the Sri Lankan elephant, the largest of the Asian elephant subspecies. CINNAMON WILD.
(B,L,D Daily)

Transfer to the beach resort in Galle, the fourth largest city in Sri Lanka, with excellent examples of Portuguese colonial architecture. Stop along the way to take photos and learn about the ancient Sri Lankan practice of fishing on stilts. In the evening luxuriate in a hammock to the sound of crashing waves. Next day, you will be picked-up early and transferred to Mirissa for a whale watching excursion. Located within the International Whaling Commission’s protected zone in the Indian Ocean, the south coast of Sri Lanka offers excellent chances to observe cetaceans such as blue and sperm whales. Also visit the Gall Fort and enjoy a walk with a renowned author and photographer who will regale you with the fascinating history of the best-preserved living colonial Fort in Asia. THE LIGHTHOUSE HOTEL.
(B,L,D Daily)

Colombo, the largest city in Sri Lanka, is today’s destination. Here be treated to a mosaic of cultural influences that is the result of centuries of trade with the world. Enjoy an afternoon free of scheduled activities. This evening you will be part of a pre-departure blessing ceremony with a Buddhist Monk in a local temple and a farewell dinner with fellow travelers when you return to the hotel. CINNAMON GRAND. Next day, transfer to the airport for your return flights home, taking with you the memories of the many wonders of Sri Lanka.
(B,L,D; Meals Aloft)

Arrive Sri Lanka and spend a night at Negombo. Next morning, proceed to Wilpattu National Park for a late afternoon safari. Some sixty sand-rimmed natural lakes dot the park, the result of coalescing rain water in natural depressions in the earth. Consequently many wetland species are found here such as Garganey Duck, White Ibis, and Purple Heron. Wilpattu also offers sanctuary to a number of endangered animals such as the Sri Lankan elephant, leopard and sloth bear. MAHOORA MOBILE TENTED CAMP.

Maldives has deep blue seas, turquoise reefs, white sandy beaches and palm trees. It is also a place full of character, where its people have long spent their days languishing in the very essence of idyll living. While it is the perfect place to sit on a beach and watch a sunset with a cocktail balanced on your hand, it is also a geographical marvel, knowing that there are thousands of fish swimming around the vivid corals just a few feet away from where you sit. Your days here will be at leisure to relax by the pool or enjoy Maldives by experiencing water sports, or you may go to one of the few inhabited islands to see the real life of Maldivians. Your all-inclusive resort sits exclusively at the tip of the South Male atoll with easy access to the capital city of Male. ADAARAN CLUB RANNAALHI.

Sri Lanka has a complicated weather pattern and is governed by two monsoon seasons – from May to August the Yala monsoon brings rain to the island’s southwestern half, while the dry season here lasts from December to March. The Maha monsoon blows from October to January, bringing rain to the North and East, while the dry season is from May to September. Climatically speaking, the driest (and best) seasons in Sri Lanka are from December to March for the west coast, the south coast and the Hill Country, where most of our program occurs, and from April to September for the ancient cities region and the east coast.

The Maldives has a tropical climate and two seasons: the dry northeast monsoon from December to March when there’s very little rain and low humidity, and the wet southwestern monsoon from May to November, with more strong winds and rain. April is a transitional period noted for clear water and heat. The temperature remains remarkably consistent at around 85°. Diving is best on the western side of any atoll from May to November and on the eastern side of any atoll December to April. 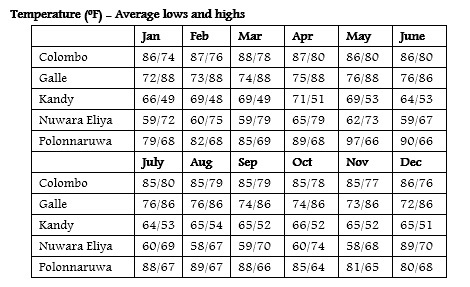