Great Escapes: Tanzania – Treasures from the Land of Kilimanjaro
Categories: East Africa, GREAT ESCAPES, Sub-Saharan Africa, Tanzania Products Link PDF:   Itinerary Upload File:   Product Banner Image:   , , , Departure Date and Year:   Base Price:   4,395 Products Link PPT:
Select Category
Escape to Tanzania, a land of untamed beauty and vibrant life. Meet the quintessential creatures of Africa along the sparkling banks of Lake Manyara and the endless rolling plains of the Serengeti. Go on safari in search of lion, elephant, giraffe, and so much more. Spend time with the nomadic Maasai and learn about their way of life. Discover the very roots of humanity at Oldupai Gorge, where our earliest ancestors were discovered. Complete your journey with an optional extension to the lush beauty of Zanzibar.

Your journey begins as you board your overnight flight to Africa.
Meals Aloft

Upon arrival in Arusha today, you will be met by your Classic Escapes representative and transferred to your hotel located a short distance from Arusha Town Centre

Located on a coffee plantation on the shores of the lake from which it gets its name, the Lake Duluti Serena Hotel is the perfect place to relax before embarking on your safari experience. Designed in the style of an African village, guests are housed in cottages thatched with banana fronds, surrounded by tropical shade trees and bougainvillea. All guest rooms have en suite bathrooms and many amenities. The lodge boasts magnificent views of the mighty snowcapped Mount Kilimanjaro on one side and Lake Duluti and the rugged peaks of Mount Meru on the other. Overnight at LAKE DULUTI SERENA. www.serenahotels.com

Begin your safari adventure this morning with your drive to Lake Manyara National Park, an ornithological paradise with over 350 species of birds. You may see Verreaux’s eagle, a variety of vultures, storks, swifts, and swallows winging their way atop the spectacular cliffs overlooking the lake, which often has a pinkish hue due to the flamingos shimmering in the distance. Lake Manyara, at 3,150 feet in altitude, varies in salinity levels with wetter and drier climate cycles, and at times it is replete with flamingos, pelicans, storks, and cormorants. Springs in the park’s northern end support a dense groundwater forest of magnificent giant fig and mahogany trees, which shelter blue and vervet monkeys and an abundance of baboons, bushbuck, waterbuck, and elephants. South of the groundwater forest, acacia woodland and open grassland are frequented by buffalo, wildebeest, impalas, giraffes, zebras, and the elusive treeclimbing lions, the signature species of this park. Perhaps the most recognizable tree found here is the baobab tree, which folklore says was uprooted and planted upside down. The hippo pool, where visitors may get out of their vehicles, is located on a freshwater stream that enters the lake at its northern tip.

Your accommodation is the Lake Manyara Serena Lodge, on the edge of the Mto-wa-Mbu escarpment, overlooking the Great Rift Valley and the stunning Manyara soda lake. The great birds of prey that glide on thermals below your balcony inspired the design of Lake Manyara Serena Safari Lodge – swooping curves are complemented by soft, geometric patterns; stylish murals depict bird migration patterns. The circular shape of the buildings is a tribute to indigenous architectural traditions. All rooms have en suite facilities and private balconies overlooking the escarpment and the lake beyond. There is a curio shop, a swimming pool with vanishing horizon to Lake Manyara and a pool bar. Overnight at LAKE MANYARA SERENA SAFARI LODGE. www.serenahotels.com Driving time from Lake Duluti Serena to Lake Manyara: 2-3 hours on good tarmac roads

Get set for a long, but scenically spectacular, drive to Serengeti National Park (3,646,500 acres); the jewel in the crown of Tanzania’s protected areas with over 3 million large mammals roaming its plains. It lies between Ngorongoro and Lake Victoria and adjoins Kenya’s Maasai Mara. The Serengeti has come to symbolize paradise to all, including the local Maasai, who have grazed their cattle on the vast grassy plains for generations. To the Maasai, it is Siringitu – “the place where the land moves on forever.” Today, the Serengeti National Park, the Ngorongoro Conservation Area, and the Maasai Mara Reserve across the border in Kenya, protect the greatest and most varied collection of terrestrial wildlife on earth, and one of the last great migratory systems still intact. More than a million wildebeest, accompanied by hundreds of thousands of zebras and other herbivores, descend upon the short-grass plains of the southeastern Serengeti at the start of the rainy season around December. After calving in January and February, they scatter over the southern and central plains. By May the rain ends, the grass has been reduced to stubble, and the animals begin their long march to dry-season grazing grounds near the permanent waters of the Serengeti’s northern woodlands and Kenya’s Maasai Mara. Reaching these destinations by July or so, they remain until October, when they head back to the southeastern Serengeti. This struggle for survival continues unaided and unaltered through the millennia.

The Serengeti is incredible to visit any time of the year. In the Seronera Valley towering yellow fever trees and palm thickets line the Seronera River and its hippo pools. This is a superb area for seeing predators such as lion, leopard and cheetah, and their prey – giraffe, topi, Bohor reedbuck, Defassa waterbuck, buffalo and impala. The kopjes (prehistoric rock outcroppings) host hyraxes, dwarf mongooses, and red-headed agamas, while patience might reward you with a sleepy black-maned male lion or leopard. The open grassland is home to large groups of Thomson’s and Grant’s gazelles, spotted hyena, jackal, and such birds as the Double-banded Courser, Yellow-throated Sandgrouse, Red-capped Lark, Fischer’s Sparrow-lark, and Capped Wheatear. Your twice-daily wildlife drives will allow ample viewing. As an optional excursion, you can take a balloon safari for an exhilarating experience over the Savannah as the early sun rises and the animals are more active.

Your accommodation, the Serengeti Serena Safari Lodge, is set high on a hill with breathtaking vistas of sweeping grasslands and the unspoiled wild landscape of the Serengeti Plain. The lodge design is simple but stunning. Inspired by a traditional African village, separate rondavel “huts” house the luxury guest rooms that have their own view of the vast Serengeti Plain. From the overall impression to the smallest detail, the lodge is rich in local atmosphere created by indigenous handicrafts and art. A delightful water feature runs through the main public areas, creating a natural source of waterborne plants and providing a home for many native species of reptiles, amphibians, and birds. Overnights at the SERENGETI SERENA SAFARI LODGE. www.serenahotels.com/tanzania/serengeti/home.asp Driving times from Lake Manyara National Park to Serengeti National Park 5-6 hours on mostly dirt track

Your bumpy but scenic road takes us to Oldupai Gorge, where in 1959 Louis and Mary Leakey uncovered Zinjanthropus and Homo Habilis. We will have the opportunity to trek down the gorge with an expert who will give us an inside look at the area and its history. Oldupai is one of the world’s most important paleoanthropological locations. Thousands of stone tools, some of which have been used by Homo Habilis, have been found at Oldupai; the oldest style is easiest to remember, because it is called Olduwon. In addition to the remarkable human fossils – prehistoric elephant, giant horned sheep and enormous ostrich fossils have been found here while extinct species unearthed include three-toed horses and giant antelope. Since the Leakey’s first began searching the area for clues to our distant past, more than sixty hominid remains have been excavated, belonging to four different hominids, showing the gradual increase in brain size and in the complexity of their stone tools. The gorge itself is a very steep-sided ravine roughly 30 miles long and 295 feet deep. It resembles a small Grand Canyon with exposed strata of different layers where the deposits of rich fossil fauna, hominid remains and stone tools were found. The gray lines are volcanic tuffs; eruptions are used to estimate the age of the fossils.

In the afternoon, visit a Maasai village and learn about this fascinating culture that has existed through the millennia in perfect harmony with nature. Continue on to your accommodations for the next two nights, the Ngorongoro Serena safari Lodge.

On your second day here, board your land cruiser for an amazing journey as you descend onto the floor of the crater, a World Heritage site, which is an extinct volcano and the largest unbroken caldera in the world. The cone, thought to have collapsed nearly two million years ago, is believed to have been as tall as, if not taller, than Mount Kilimanjaro. The crater (1,800 feet deep and 102 square miles) is a microcosm of East African scenery with abundant wildlife including more than 25,000 larger animals, mostly zebra and wildebeest. As you descend, you might be able to see the local Maasai as they take their cattle down the steep walls of the crater. It is their right, negotiated with the government and parks authority, to graze their cattle in about 75% of the crater floor. The mix of cattle with the wild animals makes for some terrific photographs, and the interaction between domestic and wild animals is almost unbelievable. Your wildlife-viewing will be dramatic, and the experience memorable. Return to the rim of the crater six hours later (regulations now specify that no one can stay longer than six hours daily on the crater floor) and drive to your lodge.

As if in a land before time, the Ngorongoro Serena Safari Lodge is built at the rim of the crater. The plant and ivy-covered native stone blends masterfully with its surroundings and the flowering plants attract a plethora of colorful birds. Most of the 75 rooms have private terraces with views of the crater floor where countless animals make their home. Here, visitors exist in perfect harmony with the natural environment and the wildlife that inhabits it. Overnights at the NGORONGORO SERENA SAFARI LODGE. www.serenahotels.com Driving times from Serengeti to Ngorongoro: approximately 4.5 hours on dirt track.

You will depart Ngorongoro after a delightful breakfast and head south east en route to Lake Manyara, Mto wa Mbu village and Tangangire beyond. Through the highlands and the Karatu district, you will view the scenic wheat plains and coffee plantations before journeying down the spectacular escarpment where you turn north on to the main Arusha Dodoma road and head to Arusha.

Enjoy a guided tour of the Shanga Shangaa, meaning “Beads Amazing”, in Swahili, a small business employing 42 disabled, mute and deaf people based near Arusha. Lunch will be provided and a dayroom at the LAKE DULUTI SERENA LODGE. Later in the early evening, you will be transferred to Kilimanjaro Airport to catch your overnight flight back to USA, via Amsterdam.

Today land back in the US, bringing with you all the special memories of East Africa.
Meals Aloft

Spend three days on the exotic island of Zanzibar beginning in Stone Town’s winding alleys and bustling bazaars. Stay at the ZANZIBAR SERENA INN on the Indian Ocean – a haven of tranquility and old-world opulence. Dazzle your senses at a spice plantation and watch rare, red colobus monkeys frolic overhead in Jozani Forest. 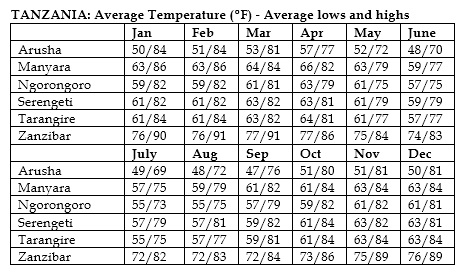