Our Uganda Great Apes Safari is specifically designed for those fascinated by apes and monkeys. Based on our Apes Like Us work, we offer exclusive insights and activities on your journey to explore the ecology and conservation of these magnificent primates of Uganda’s Albertine Rift region. Our safari begins in the iconic Kibale Forest trekking for chimpanzees, and includes three separate opportunities to experience chimps, including a half-day Chimp Habituation Experience (CHEX)*, and three full-days in the mountain gorilla country of Bwindi Impenetrable Forest National Park.

Uganda is known as the “Pearl of Africa”, and it is definitely the jewel of primate discovery. Accessible and safe, and acclaimed for its outstanding natural beauty and diversity – Uganda’s primate country is in the center of Africa’s “Great Lakes” ecosystem. Over 5,000 chimpanzees populate the lush hilly region. It’s also in these densely packed, “impenetrable”, forests that Uganda’s most famous residents resides—the breathtaking and endangered mountain gorillas—over 600 of these powerful gentle great apes, half the world’s population, live in the rainforests of Bwindi. 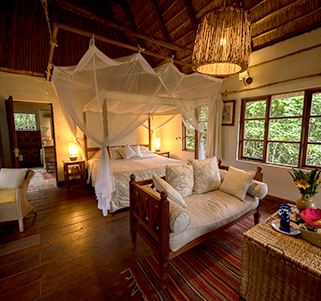 *This can be substituted for a 2-3 hour chimp trek for those not prepared to spend half day in the forest.

**The GLOBIO Uganda Great Apes Safari is based on minimum seven participants. Exclusive arrangements can be made for private groups, please contact Meg at meg@globio.org for more information.

Your journey begins as you board your overnight flight to Entebbe.
(Meals Aloft)

Arrive Entebbe where you will be welcomed by your Classic Escapes representative who will then accompany you to your charming hotel, where the rest of the day is at leisure.

Overnight at the BOMA GUESTHOUSE.

This morning board your light aircraft flight to Kasese, gateway to the enchantment of Kibale Forest National Park. Kibale, with ancient trees up to 180 feet in height, is a wonderful place to experience the extraordinary diversity of a tropical rainforest. The park is comprised of pristine lowland tropical rain forest, montane forest, and mixed tropical deciduous forest as well as grassland and swamp. In the afternoon join forest and swamp walks led by excellent local guides. You may see a Crowned Crane (Uganda’s national bird) nesting and feeding site, or you may climb up a tree-house viewing platform to see the exotic looking Dura River screw palms. The sightings of birds in the forest are quite impressive – there are at least 325 species, many of which are found nowhere else. In spite of the impressive bird life, the stars of the show here are the primates. You may find families of chimpanzees chattering and swinging through the ancient forest canopy.

Overnights at the PRIMATE LODGE.

Your game drives will afford you an opportunity to perhaps watch the entertaining antics of the Ugandan kob. Although still numerous in western Uganda, the kob is far less common in other areas of East Africa.

Besides your drives you will also embark on a two-hour launch trip on the Kazinga Channel and Lake Edward to view some of the largest concentration of hippo in the world, reported to be about 30,000. Nile crocodile, African rock python, monitor lizard, and snakes can also be sighted. The boat ride will also afford excellent birding opportunities.

On your second day here you will go on guided primate walk to the stunning Kyambura (or Chambura) Gorge also called the “Valley of Apes” in search of habituated chimps (at additional cost.) The over 10-mile long Kyambura Gorge is one of Uganda’s Natural Wonders located in the far eastern corner of Queen Elizabeth National Park. Enter into this amazing gorge and you will be marveled by the verdant, rich tropical rain-forest right close to the Equator crossing.

Enjoy your morning game drive and afterwards, drive to your home for the next two nights, the Ishasha Wilderness Camp, where you are introduced to the wildlife of this beautiful park. This is the home of the elusive tree climbing lions for which you will search.

Overnights at the ISHASHA WILDERNESS CAMP.

Your drive now takes you to the enchanting Bwindi Impenetrable Forest National Park, a designated UNESCO World Heritage Site, a true African “jungle”, so called because of the dense undergrowth, vines and other vegetation which make it almost ‘impenetrable’. It is both mysterious and awesome. The lowland rainforest and montane forest vegetation constantly struggle to reach heights that will allow it to receive more light.

At least 120 species of mammals make their home here in one of the richest ecosystems in Africa. Besides the 10 species of primates, elephant, bush pig, giant forest hog, many species of bats and rodents, at least 346 species of birds including rare forest birds, 14 species of snakes, 27 species of frogs and toads, 6 chameleons, 14 lizards, skinks and geckos, and at least 202 species of butterflies are resident in the Forest. There are also several endangered species of birds with limited ranges.

Ugandan authorities are fiercely protective of this natural treasure. Your group will have the opportunity for two treks per person to view the mountain gorillas during your stay (at additional cost). After breakfast, you will proceed to the nearby park headquarters and meet with your excellent local guides and porters, who will carry your personal items and assist you during the trek. You’ll start your trek in tea plantations and enter the forest from there.

Your treks will take you through a fairyland forest, an experience that in of itself is thrilling. As you venture forth, you will spot evidence that the gorillas have been present. The treks can last from four to seven hours (or more) depending on when you spot the gorillas. There is an hour limit to the time you spend with these majestic creatures once you spot them. Tracking gorillas through misty, seemingly impenetrable forests can be an exhausting process as the paths are often slippery, entangled and wet. However, this effort is quickly forgotten the minute you encounter these beautiful creatures.

While in the area, you will visit the Batwa community to gain an insight into the 4,000-year-old culture of the Batwa pygmies who live on the outskirts of Bwindi. The Batwa were the original ancient dwellers of the forest. The first records of pygmies were made by the Egyptians over 4000 years ago. They described short stature people living near the “Mountains of the Moon” extolling their abilities as dancers and story tellers.

Overnights at the BWINDI LODGE.

Bid farewell to the beautiful forest as you board your flight to Entebbe where upon arrival you will be transferred to your dayroom at the HOTEL NO. 5. Later tonight, return to the airport to connect with your flight back to the United States.
(B,L, Meals Aloft)

Today you arrive home, bringing with you all the wonderful memories of Uganda.
(Meals Aloft)

Start your Ugandan experience with an adventure on the banks of the Albert Nile. This is where part of the movie The African Queen was filmed. Cruise up the Nile to view glorious Murchison Falls in the company of hippo, gigantic crocodile and a plethora of exotic birdlife, including the Shoebill Stork. Murchison Falls National Park is one of the most spectacular and largest (1,480 square miles) in Uganda. Other animals regularly seen include elephant, giraffe, lion, buffalo and many antelope species, including the dainty oribi.

Please inquire by phone at (800) 627-1244 or email info@classicescapes.com for more information.

Pricing: Per person, based on double occupancy

Uganda is a beautiful country and lovely to visit any time of the year. When gorilla trekking, it’s not uncommon to encounter rain. After all, it is the rainforest you will be visiting and it rains quite a lot, but that will not stop you from trekking to see the gorillas, just have adequate raingear and hiking boots. The rainy season overall in the country follows the East Africa pattern – long rains in April/May, and short rains in November. Gorilla viewing is actually better during the rainy season, as they’re generally feeding in lower elevation and can be viewed with less trekking. However, this can never be guaranteed – neither can one guarantee 100% success in viewing the gorillas, although they’re almost always sighted. 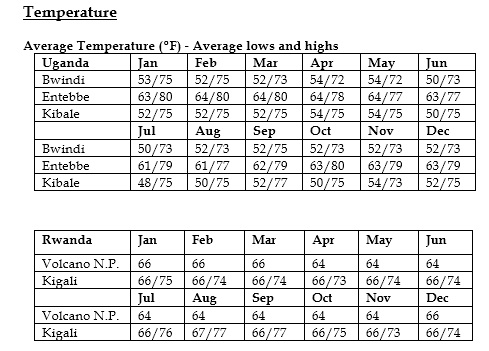